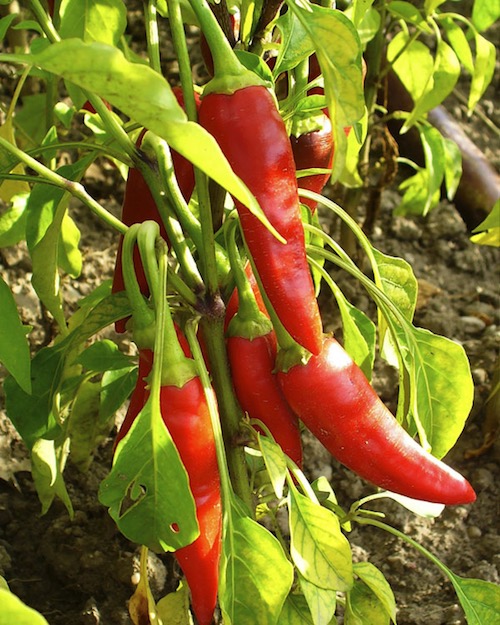 Cayenne is said to be unequaled for warding off diseases and equalizing blood circulation. It is called a “Supreme and harmless internal disinfectant”. It increases the heart action but not the pressure. It is said to prevent strokes and heart attacks. And is used for external and internal hemorrhaging.

Cayenne increases the power of all other herbs, helps in digestion when taken with meals and promotes all the secreting organs. It is a natural stimulant for diarrhea and dysentery. Because of its stimulating action, this herb is very important when you want quick relief from the flu and colds.

The most popular arthritis remedy used around the world is Cayenne. It purifies the blood and relieves pain and itching when taken internally or applied externally in a cream. Cayenne has been shown to lower blood pressure and prevents heart attacks and strokes. It has also been found to lower cholesterol levels by decreasing liver production of cholesterol and triglycerides.

Cayenne has the ability to rebuild tissue in the stomach and heals stomach and intestinal ulcers. It is known as the purest and best stimulant in the herb kingdom. It is said to be a catalyst, carrying all other herbs quickly to the part of the body where it is most needed and increases their effectiveness.

Cayenne is high in vitamins A, C, iron and calcium. It has Vitamin G, magnesium, phosphorus and sulfur.
It has some B-complex, and is rich in potassium.

It’s well known that cayenne pepper is an important ingredient in hot sauces, salsa and spicy restaurant dishes, but mostly unknown that extracts of cayenne can help ease the terrible burning pain of shingles (herpes zoster), reduce muscle soreness, speed healing of strains and sprains, heal ulcers of the digestive tract, and stimulate metabolism, helping the body get rid of excessfat.

The herb (and spice) cayenne is the ripe fruits (called peppers) of a blend of varieties of Capsicum annuum var. minimum and small-fruited varieties of C. fructescens from the nightshade family.

The origins of this herb, now used as food and medicine in most countries of the world, is uncertain. Cayenne was not mentioned in writings from ancient Egypt (1500 BC), Greece (455 BC to 50 BC), Rome (25 BC to 150 AD), Persia (13th century), India and China, so historians claim Cayenne peppers originated from the Americas, most likely from the banks of the Amazon. It is impossible for modern botanists to say where cayenne grew in some ancient time as a wild plant, because it has been domesticated and widely cultivated for so many centuries. Thus, we are content today to enjoy its fruits without being sure of its true origin and much of its history, though it is likely that cayenne went to India and China as early as the 14th or 15th century, and began to be cultivated in Europe in the 16th century.

Today, cayenne is as popular as ever as a food, and modern science has continued to support its use as a healing herb with a number of well-designed clinical and laboratory studies. It’s world-wide acceptance as an effective medicine is supported by ts official status in the Pharmacopoeias of Austria, Egypt, Germany, Hungary, Italy, Japan, Switzerland and Belgium.

As anyone knows who has eaten a very spicy meal at a Thai or Mexican restaurant, Capsicum at first causes a strong burning sensation of the lips and mouth, followed by a sense of warmth spreading to the stomach and intestines.

Casein-containing foods (such as milk) can quickly lessen the burning feeling of cayenne on the lips and mouth, probably because the heat-producing compounds of cayenne are fat-soluble and are taken up and removed from the local area.

Not only do people of warm climates love cayenne in spicy dishes, but as a folk remedy for weak digestion and loss of appetite accompanied by gas and sluggish elimination, and as a stimulant to the circulation and the powers of resistance to help ward of colds and flus.

Cayenne is a favorite with herbalists from many countries, and in the U.S., it was the “number two” favorite remedy of Samuel Thompson of the early 1800s, who started a popular herbal multi-level marketing extravaganza with his patent formulas–sort of a 19th century Herbal Life. He used it especially for helping to ward off and even expel the contagion of serious infectious diseases. It was also a favorite of the well-known Dr. Christopher, a Mormon herbalist who traversed the country in the 1960s and 70s, helping to bring herbal medicine back into American consciousness. In the late 70s, I remember watching him in a dynamic Seattle lecture, to the amazement of onlookers, put cayenne directly into his eyes as a healing and clearing remedy (don’t try this at home folks!). He was enthusiastic about its use for numerous complaints, including as a styptic to help buy propecia usa stop the bleeding of cuts.

Today, cayenne is one of the most-often used herbal remedies and is commonly recommended by herbalists for increasing circulation in people with cold hands and feet, as a metabolic stimulant for people with sluggish metabolisms who are overweight, as a warming stimulant with other herbs such as garlic and ginger for protecting against colds and upper respiratory tract infections, and externally as a liniment or in ointments for sore muscles, arthritis, rheumatism, low back pain, strains, sprains, bruises and neuralgia. Cayenne is also a popular ingredient in herbal hair loss remedies.

The most important active ingredient in cayenne are components of a pungent oleoresin, most importantly, capsaicin, but also a number of other related compounds. Capsaicin Cayenne is also rich in carotenoids (orange and red coloring compounds), which are receiving current interest for their cancer-protective and strong anti-oxidant properties, as well as a number of vitamins (especially A and C).

There has been some discussion about whether cayenne, if it is used excessively, can irritate or even cause ulceration of the intestinal tract. In reviewing the modern scientific literature, studies agree that cayenne not only does not harm the intestinal mucosa (the protective covering), but on the contrary, can speed healing–though some people seem to be more sensitive to the irritating effect than others. In one study, daily consumption of meals containing 3 grams of chili powder did not worsen patients with duodenal ulcers who were also taking antacids. A recent study, using a video camera threaded into the digestive tract, found no visible damage to the mucosa of the stomach or upper small intestine of 12 healthy volunteers who consumed 30 grams of jalapeÒo peppers. When the subjects were given a meal containing 2 grams of aspirin, multiple gastric ulcers were seen in 11 out of the 12.

In animal studies, cayenne has actually shown a protective effect on the gastric mucosa, prompting some researchers to call for further human studies.

One of the more interesting effects of cayenne (or capsaicin) is its proven enhancement of the metabolic rate and thermogenesis. Preliminary studies suggest that capsaicin or cayenne may increase the burning of fat in the body.

There is also an indication from laboratory studies that capsaicin can slow fat absorption from the small intestine. Although more work needs to be done before its effectiveness in weight loss programs can be proven, products are currently being developed and a few are already available in health food stores.

Capsaicin has received tremendous attention as a topical analgesic for relieving the pain that often accompanies herpes zoster (shingles) outbreaks and other skin ailments. Capsaicin is approved by the Food and Drug Administration as an Over-the-Counter (OTC) medication and is commonly recommended by doctors under the trade name ZostrixÆ for this purpose, as well as for controlling pain from rheumatoid arthritis and osteoarthritis. Studies show that capsaicin may block the feeling of pain by depleting and then blocking the production of “substance P,” which is thought to be the main chemical messenger of pain from the peripheral sensory nerves to the brain. It may also be involved with the release of inflammatory substances in affected joints of arthritis.

Because capsaicin is very alcohol-soluble, tincture of cayenne may be effective as a home-remedy for the relief of mild pain. Although I recommend seeking the advice of a qualified health professional for shingles or arthritis before attempting to self-medicate with cayenne, I have found the tincture, or ointments or salves that contain it are often effective for relieving mild to moderate muscle aches or pains. The preparations should be applied consistently at least 3 or 4 times daily (up to 5 or 6 times) for up to 2 weeks, or even a month before they are effective. After 4 or 5 months of pain relief, up to 50% of the people who use a capsaicin product may not experience further pain. For those that do, treatment can be continued. A few drops of a tincture of cayenne was recommended in the British 19th century medical press as a sure remedy for a toothache.

Redness and a burning sensation sometimes accompanies the application, but this usually disappears after two or three weeks. After control of the pain is achieved, the cayenne preparation has to be used continuously for continued relief to occur. Clinical studies indicate that up to 80% of the volunteers who use a capsaicin cream experience some measure of relief, which is significantly better than placebo groups. Watch for any irritation or redness of the skin locally, which might indicate an individual sensitivity to cayenne, and make sure to keep all cayenne and capsaicin preparations away from the eyes. In this case, use less often or consult a qualified health care practitioner for guidance. Unlike mustard, which can blister and burn the skin, cayenne, even in its most powerful forms will not cause these undesirable side-effects. Finally, there is some recent evidence to suggest that capsaicin-containing preparations may be useful for treating psoriasis.

In the food industry, cayenne is used in numerous foods and beverages besides hot sauces and condiments, including alcoholic beverages, meat products, candy, baked goods, puddings, and frozen dairy desserts (cayenne ice-cream anyone?).

The next time you enjoy a spicy Thai dinner, think of all the additional benefits from mother nature’s food pharmacy that accompany the warm glow of a satisfying meal.